Our Trust Bank goes to Uganda 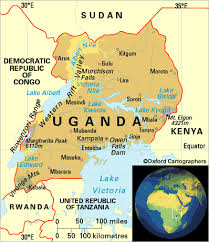 Last month Zion was blessed to be able to send $2500 to Opportunity International to fund a trust bank.  http://zionuccarendtsville.org/2011/02/17/1232/We left it open as to where the trust bank would be sent. We received word that the bank will be established in a village in Uganda.    We are delighted to know where our gift will be used, and pray that it will help to bring hope to this struggling nation.  Here are some facts about Uganda from the U.S. State Dept. Site:

PEOPLE
The Baganda are the largest ethnic group in Uganda and comprise approximately 17% of the population. Individual ethnic groups in the southwest include the Banyankole and Bahima (10%), the Bakiga (7%), the Banyarwanda (6%), the Bunyoro (3%), and the Batoro (3%). Residents of the north include the Langi (6%) and the Acholi (5%). In the northwest are the Lugbara (4%). The Karamojong (2%) occupy the considerably drier, largely pastoral territory in the northeast. Ethnic groups in the east include the Basoga (8%) and the Bagisu (5%).

Uganda’s population is predominately rural, and its population density is highest in the southern regions. Asians constituted the largest non-indigenous ethnic group in Uganda until 1972, when the Idi Amin regime expelled 50,000 Asians who had been engaged in trade, industry, and various professions. After Amin’s overthrow in 1979, Asians slowly began returning, but Uganda’s Asian population has never reached its pre-1972 numbers.

HISTORY
When Arab traders moved inland from their enclaves along the Indian Ocean coast of East Africa and reached the interior of Uganda in the 1830s, they found several African kingdoms with well-developed political institutions dating back several centuries. These traders were followed in the 1860s by British explorers searching for the source of the Nile River. Protestant missionaries entered the country in 1877, followed by Catholic missionaries in 1879.

In 1888, control of the emerging British “sphere of interest” in East Africa was assigned by royal charter to the Imperial British East Africa Company, an arrangement strengthened in 1890 by an Anglo-German agreement confirming British dominance over Kenya and Uganda. In 1894, the Kingdom of Buganda was placed under a formal British protectorate.

Britain granted internal self-government to Uganda in 1961, with the first elections held on March 1, 1961. Benedicto Kiwanuka of the Democratic Party became the first Chief Minister. Uganda maintained its Commonwealth membership. A second round of elections in April 1962 elected members to a new National Assembly. Milton Obote, leader of the majority coalition in the National Assembly, became prime minister and led Uganda to formal independence on October 9, 1962.

In succeeding years, supporters of a centralized state vied with those in favor of a loose federation and a strong role for tribally-based local kingdoms. Political maneuvering climaxed in February 1966, when Prime Minister Milton Obote suspended the constitution, assumed all government powers, and removed the ceremonial president and vice president. In September 1967, a new constitution proclaimed Uganda a republic, gave the president even greater powers, and abolished the traditional kingdoms. On January 25, 1971, Obote’s government was ousted in a military coup led by armed forces commander Idi Amin Dada. Amin declared himself president, dissolved the parliament, and amended the constitution to give himself absolute power.

Idi Amin’s 8-year rule produced economic decline, social disintegration, and massive human rights violations. The Acholi and Langi ethnic groups were particular objects of Amin’s political persecution because they had supported Obote and made up a large part of the army. In 1978, the International Commission of Jurists estimated that more than 100,000 Ugandans had been murdered during Amin’s reign of terror; some estimates place the figure much higher.