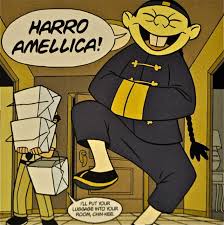 Stepping outside your comfort zone requires a bit of courage and a willingness to take a risk. Zion’s readers took a giant leap outside their comfort zones with the June selection of “American Born Chinese” by Gene Luen Yang   .  They went from the regular pages of novels and nonfiction to a totally new literary experience – the graphic novel.  Now, get those eyebrows back down!  This is “graphic” in the sense of drawing and graphic arts, not in terms of violence or sexual portrayals leaving nothing to the imagination.  Instead, think of the style of drawing and story lines of comic books.  Graphic novels are a trending literary genre with a strong following among teenagers.  Indeed, it is becoming so mainstream that National Geographic used it in the June 2016 issue for the article on looting of ancient antiquities; it is an excellent example of the format.  Zion’s readers decided to catch this new wave by exploring a selection that is required reading for ninth graders in the Carlisle school district.

“American Born Chinese” is a series of seemingly unconnected stories, some set in present day and some introducing characters from traditional Asian literature.  Going from Danny, a boy trying hard to fit in at school to the Monkey King, a self-made god with an outsize ego, had many of our readers wondering how in the world this book made sense or won numerous awards.  We persevered.  The Monkey King proceeded to master abilities that conferred immortality but did not grow in wisdom or generosity of spirit since his ego had him trapped.  Danny’s Chinese cousin Chin-Lee appeared for a visit, happy to learn and out-shine American students and thereby embarrassing Danny.  Our readers plowed onward and still wondered why this book was so popular.

We found interesting references that could only be Biblical, parallels between faiths, suggestions that we are all on a path of discovery and growth to culminate in the wisdom and knowledge of one God, whatever we believe him/her to be.  Danny ran into barriers and harsh discoveries, characters morphed, and eventually Mr. Yang tied all the disparate stories together.  Zion’s readers were left with a “What the heck did I just read?” question.  And then came the discussion and the worth of the book was revealed.

As one reader said, most books written for teens (and often adults) usually have one of four themes running through them:  fish out of water (how to fit in), coming of age, boy meets girl, finding God.  This book actually encompasses all four as it passes through the stories.  It is an ambitious endeavor by Mr. Yang, and he has opened a clever, fascinating window into the teenage mind.  Ninth graders are at an age where they desperately want acceptance from their peer group and yet still want to be seen as individuals.  They are ready to establish romantic relationships but live in fear of embarrassing themselves in front of others.  They often feel the presence of a higher power but are reluctant to acknowledge it publicly.  They can relate to Danny.  However, teens can also relate to Chin-Lee’s strong cultural foundations and desire to remain Chinese in an American culture.  In fact, teens probably accept that individuality more easily than we adults.  Part of our discussion focused on cultural assimilation (or the lack thereof) in society today.  One reader felt that the book spoke to the very root of what it means to be American.  If the United States is the land of opportunity and freedom where from many is created one melting pot, this book seemed to be invalidating that process and calling for an ethnocentric culture.  If immigrants and their children only identify with their ethnic group, are they not short-changing themselves and this country by a refusal to avail themselves of opportunities?  Opportunities seized by prior generations to provide a better life for their children.

Our readers discussed how we label people, show bias and prejudice.  All of these would strike a chord with today’s teens, and the discussion in their classrooms would likely run the gamut from present day to historical events.  Zion’s group was encouraged by a member who reported a teacher friend saying that today’s kids are more tolerant and appreciative of diversity.  They are less hooked to stereotypes and more likely to greet newcomers as individuals than see them across the divide of cultural wars.  While we adults did not understand why the Monkey King is told that monkeys do not wear shoes, teenagers probably made the leap to the idea of being true to yourself.  It would be a great cross-curricular segue to Shakespeare!  You can hear the echoes of  Polonius’s pronouncement in Hamlet paraphrased here:  to thy own self be true for then you cannot be false to anyone else – monkeys do not wear shoes, be yourself.

It was interesting to learn that Mr. Yang developed his strong Christian faith while in college.  This shines through both the story and the artwork in this novel with the Nativity pictured, the gifts of the kings, and even a Christology reference to the flesh of a holy man being food.  The author taught high school for years before moving to higher education; it is clear that he has a real talent for relating to teenagers.

Some of our readers felt there was too much symbolism and deep thinking in this graphic novel, but ironically that seems to be the point of the book – getting teens to think harder and dig deeper about who they are, what they want to become, and the choices they will need to make to achieve their goals.   If you have a few free hours, “American Born Chinese” can be an introduction to new ways of looking at things.  The format is not necessarily for everyone, and this was reflected in our readers’ votes:  Three gave it one thumb down, eight were neutral, and five gave it one thumb up.  We break now for the summer and encourage everyone to pick up as many books as possible and lose themselves in the pleasure of reading until we meet again in the fall.