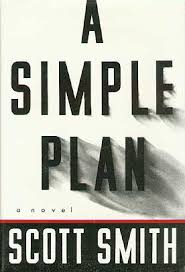 A Simple Plan by Scott Smith

Unbelievable.  This adjective peppered the February discussion by Zion’s Readers of A Simple Plan by author Scott Smith.  Unbelievable that two very ordinary brothers would find an undiscovered downed plane containing a dead pilot and a duffle bag filled with over four million dollars.  Unbelievable that they would easily embark on a violent, murderous scheme to keep the cash.  Unbelievable that this tale told from the viewpoint of the most murderous brother could sound so ordinary yet exude a disturbing evil that prompted one reader to summon comparison to The Twilight Zone and another to remove the book from his home.

When Hank Mitchell, a lowly accountant for a small town business, and his brother Jacob find a windfall in the downed plane, they view it in different ways.  Hank sees it as a way out of a stifling small town for him and his wife.  Jacob sees it as a way to recover his childhood home lost to foreclosure when his parents were unable to climb out of a pit of debt.  What both evidently fail to see is how this decision to keep the money is the first step on a tortured journey.  For when more than one person knows a secret, chances are it is no longer a secret.  Hank tells his wife; Jacob tells his friend.  The need to keep the secret becomes the top priority.  Jacob panics when an older neighbor seems to stray too close and reacts in an unbelievably violent manner.  Thinking the man dead, Hank concocts a cover-up only to find the neighbor still breathing.  With alarming alacrity, he suffocates the old man and continues with the plan.

Equally fast, this first novel jumps from mystery to thriller to what one reader called horror fiction.  Hank’s wife unbelievably accepts his transformation to murderer and ably aids and abets his decisions, even when Jacob becomes a liability and then another statistic.  From the first murder, a domino effect ensues through the succeeding eight additional murders.  The author seems to be trying to stage this story as a morality tale, employing biblical overtones such as money being the root of all evil, black crows pecking holes in Hank’s forehead (mark of Cain) at the plane’s discovery, and Hank’s young daughter having an accident which resulted in long-term brain damage (the sins of the fathers mark their children).  However, he never pulls it off.  He gives his readers few sympathetic characters, no expressions of remorse, no hero to draw the readers through the evil.  Instead, he maintains Hank’s reasonable tone reciting the escalating violence which he feels is forced upon him in order to keep the money.

While all Zion’s readers have read more graphic novels, some felt they have never read a more disturbing one.  Others viewed it as a farce, simply unable to believe that some inept ordinary guy would ever be able to get away with successive murders and not be caught.  Their motivation for continuing reading was to find out “what these idiots were going to do next”.  Some welcomed a return to the mystery genre with dead bodies around every corner and appreciated the distinction between violent and graphic.   All agreed that Scott Smith certainly can write, but some wondered why he would choose to write something like this.  Certainly, it was a dark and disturbing book delivered in a reasonable voice that only made it more horrifying.  Our readers’ votes reflected this wide variety of reactions with three readers giving it two thumbs down, one giving it one thumb down, one feeling neutral about the novel, and five giving it one thumb up.