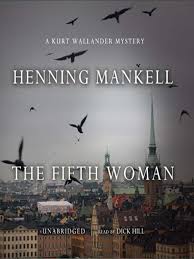 After a wonderful but fast summer hiatus, the Zion Book Club tackled the rather dark novel The Fifth Woman by Swedish author Henning Mankell.  The novel features Detective Kurt Wallender, a dedicated policeman, as he investigates a series of murders.  Although this is the fourth novel in Mankell’s series with Wallender as the lead character, the book can certainly stand alone on the basis of its story without the need to read the preceding novels.

Since the Book Club’s members prefer “a murder by the second page”, this book with two murders occurring almost immediately would seem to be a perfect fit.  However, after the initial action, there were many chapters devoted to the nitty-gritty of Swedish police investigations that made for challenging reading.  In this era of instant answers to evidentiary questions as shown on NCIS (in all its variations) and other television police dramas, the painstaking and plodding work of real-life murder investigations appeared repetitive and boring to many of our readers.  If the contrast between the real and the make-believe was one of Mankell’s goals, he was very successful.

However, Detective Wallender is also dealing with the loss of his father soon after a vacation with him in Romewhere they finally  found their relationship to be on a better footing.  Wallender, who is divorced, has a strained relationship with his adult daughter and is trying to initiate more contact with her.  As he considers the lack of emotional closeness between them, he is also trying to maintain a long-distance love relationship with a woman friend and reaches a decision to attempt to persuade this woman to move toSwedenand live with him in a house he hopes to purchase.  His descriptive analogies and blunt probing of his psyche touched a chord.  Our readers related to this conscientious man who battles depression while trying to balance the different facets of his life.  As many of us do when personal problems seem overwhelming, Wallender takes refuge in his job and puts in long hours trying to make connections between the different murders taking place.

Throughout the novel, Manning switches the narrative from the point of view of one character to the point of view of another.  As we readers watched the murderer meticulously plan and torturously execute her victims, we marveled at the depth of feeling that brought forth these plans.  As the police investigated the victims, we learned that they, like all of us, have hidden depths – characteristics and personas totally at odds with the way they are normally perceived.  Their auras of innocent victims were tarnished as their negative sides were revealed.

As the investigation picked up speed and some intuitive leaps of thought were made by Detective Wallender, we readers who have been indoctrinated withU.S.police procedure thanks to the aforementioned television shows and many televised trials (e.g. O. J. Simpson) pounced on certain missed chances and clues.  Why on earth did Wallender and his team not do this?  How could they possibly have missed that?  We enjoyed a lively discussion of different detection methods, including blood tests and DNA which has been in the news here lately.  As Wallender laments the crumbling of Swedish society which he feels the murders and the civilian response to them (citizen militias) are exposing, we readers could relate to parallels in our society.

With luck and doggedness, Wallender and his team finally apprehend the murderer, and he struggles to come to an understanding of her motives as do we.  The novel ends with a twist leaving Wallender and us with unanswered questions.  The Book Club does, however, agree on one thing – all seven of us gave it one thumb up and would recommend it as a story worth reading.

(we thank to Cindy Bushey for another great  summary)

A note from Kim Blocher:  I was not able to attend the discussion, but would like to say that I also liked the book…well enough to read the second in the Wallender series:  “The White Lionness.”  It was wonderful and far better than the first novel in terms of character development and social commentary on a changing society in Sweden.  The story, set in the early 90s, crisscrosses with  post-Apartheid South Africa in a tightly woven assassination  plot involving recently released Nelson Mandela and a criminal ring operating in Sweden. It too, like Faceless Killers,  was dark and foreboding, but it was also captivating and beautifully written.