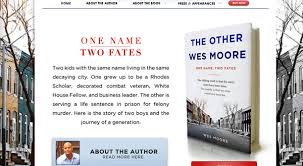 The Zion Book Club met on March 24th to discuss “The Other Wes Moore”, a true story of two African-American boys of the same name and approximate age, living in the housing projects of Baltimore, Maryland and their divergent life paths.  The author became a Rhodes Scholar after a stint at Valley Forge Military Academy and service in the U.S. military and now has a successful career in the financial world.  The other Wes Moore took a journey through the world of drug running, pregnant girlfriends, and prison and is now serving a life sentence at the Maryland Correctional Facility in Jessup, Maryland.

The author learned about his namesake from a family member who saw the deadly felony reported in the newspaper.  Wes was haunted by how easily he could have travelled down that same road and felt compelled to meet the other man.  Meetings became interviews including family members, and a book was born.  The author paints a vivid picture of life in Inner City, U.S.A.  The availability of drugs, dealing and drug running as the economic basis of everyday life for many, the absence of fathers and mentors, teenage motherhood and women raising multiple generations, the lack of respect for self and others, and general acceptance of no accountability for personal choices left Zion’s readers feeling quite depressed.  Luckily, the author had a solid family background even though his father died when Wes was only six years old.  His mother was a strong woman with emotional and financial support from her parents.  Wes overcame temptations, had strong mentors, and met key individuals at pivotal points of his development for all of which he gave acknowledgement and thanks.

While the readers had mixed feelings about the book, giving five thumbs-up and six neutral ratings, all agreed it was a worthwhile story.  The book evoked memories in different Zion readers who personally experienced integration of schools in the 1960’s, community organization work in the south during the 1970’s, and personal interactions with disaffected youth with no understanding of appropriate behavior.  There was dismay and depression at the wide-spread lack of parental influence and inspiring role models shown in various examples recounted by different Zion readers in the teaching profession.

We also remembered the frustration felt when Zion attempted to help a family in distressed circumstances and wondered if we truly had any impact.  However, there was encouragement in knowing that doing what we can in any way, large or small, is always a good thing whether we see a visible result or not.  There was also comfort and hope in being reminded by one reader that the integration of society is still a relatively young process in this country that naturally is experiencing growing pains.  We marveled at how far we’ve come.

The discussion then evolved into a consideration of the way in which public policy can assist this growth, and how current policy is trying to pick up the pieces instead of trying to nip destructive behavior in the bud at an early age by providing programs and reinforcements for at-risk children.  As you can see, although the book itself received middle-of-the road ratings by the readers, it engendered an in-depth discussion that ranks near the top of our list!