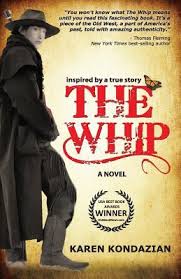 The Whip– by Karen Kondazian

Welcome back to another season of entertaining, inspiring, and thought-provoking reading with Zion’s Book Club! While we read for different reasons, we all hope that books will deliver the promise implied on their book covers. Sometimes that implication is a little difficult to decipher. The cover of our September choice, The Whip by Karen Kondzian, depicted a Western-dressed man with androgynous features staring over his shoulder as if daring the reader to knock the chip off it. Text informed the readers that this book was inspired by a true story, and a printed review promised a realistic view of this nation’s Old West. This was language guaranteed to intrigue and a large promise, indeed!

We meet Charley, a man facing imminent death but anxious to hold mementos of his life in his hands one last time – a baby’s dress, a whip. As his memory slips back to earlier days, our readers meet a small baby girl arriving at a cold, friendless orphanage and watch a young boy form a bond with the baby, protecting her as they grow. The girl exhibits an independent streak, finds a foster father in the old black man who cares for the orphanage horses, and learns how to ride and understand the different personalities of the residents of the barn’s stalls. She quickly grasps the intricacies of steering a team of horses and finds a warmth and acceptance from the animals and the old man while tension develops between her and the boy, Lee.

The author jumps a few years, and we see the girl, Charlotte, as a woman of 35 and a cook at a boarding house, wondering at the path her life has taken. It abruptly turns as she meets a black man, Byron, the blacksmith for the town, and falls in love. Ignoring the prejudices of the time, they become a couple and have a baby girl. This is all observed by Lee, who engineers a lynching which results in the death of Byron and the baby as well as the attempted rape of Charlotte.

The path of her life again changes as her focus becomes revenge upon Lee for her losses. She chooses to follow him to California the safest way she can – she adopts male clothing and mannerisms. The author vividly depicts the hazards of pre-Civil War days’ travel and authentically evokes the cultural flavor of a West peopled with individuals struggling to find an identity or trying to hide one. Charlotte’s one skill that could earn her a living is horses. She takes the test to become a stagecoach driver and passes easily. Kondzian has a varied cast of lively characters that ensured an easy read as Zion’s Book Club followed Charlotte’s career as Charley Parkhurst, driver and impersonator extraordinaire.

We were rather astounded that Charlotte could become Charley so easily for it is no simple matter to remember to constantly deepen your voice and alter your walk. However, it is often said that clothes make the man – or in this case, the woman – and people generally expect to see what they are conditioned to see. As the book progressed, we accepted Charley as his contemporaries did and were somewhat surprised to see Charlotte morph into Charley in feeling and thought, a bit of writing that showcased Kondazian’s talent. We found many of the events emotionally wrenching and learned a great deal about stage coach drivers and the hardships they faced. It was difficult to sift the fiction from reality. As one of our readers commented, sometimes historical fiction gets a little too fictional. There were some jarring uses of language that seemed more 21st century than 19th, and a liberal sprinkling of the F word that caused our readers to wonder when that word actually became part of the vernacular (Note – a quick check of Wikipedia suggests that the word dates from 1475). We also found it amazingly convenient that Charlotte could travel clear across the country and somehow meet up with Lee in the vastness of California. Another surprise was the fact that quite a few women passed themselves off as men in the West.

As Zion’s readers followed Charlotte/Charley through her life, we marveled at the unanticipated consequences of her decisions and how those decisions affected the people with whom she was closest. Since some of those consequences were fatal to others, we pondered the weight that added to shoulders already bearing the losses from her earlier life and concluded that loneliness was a constant companion. But Charlotte never let life beat her totally down; perhaps she took an ironic enjoyment from the thought that death would finally reveal her secret. At the end of the novel, the author included obituaries of Charley Parkhurst and letters from people who had met him or knew him. Certainly, this book fulfilled the promise of its cover and both educated and entertained. Eight of Zion’s readers gave it one thumb up and one reader remained neutral. October’s book will be The Devil in the White City by Erik Larson – join us!