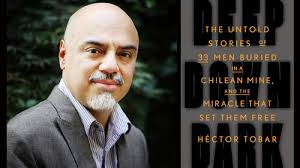 Deep Down Dark by Hector Tobar

Most people experience nightmares at some time in their lives, some recurring and some merely a one-time thing. It is a debatable point as to whether these nightmares have meaning or reflect current life events. It is true that many people dream about the same thing; in fact a google search will list the ten most common dreams. Among the ten, fear of being trapped ranks near the top. Dreamers know the dramatic relief felt upon awakening and realizing it was only a dream. Now, imagine that the dream was reality.

In August 2010, outside the city of Copiapo, Chile, the San Jose mine suffered a tremendous collapse and trapped 33 miners in its depths. For 17 days, the outside world had no idea these men were still alive. When contact was finally made, there was relief and jubilation until reality set in again. To drill through and around thousands of tons of rock would take careful planning, specialized equipment, luck, and time – maybe months of it. How long can people be trapped? How can they survive? The world watched, waited, sent aid and equipment, and cheered as the miners were finally brought, one by one, to the surface after 69 days being buried alive. They were heroes, celebrities, burning bright on the international stage for a short time, and then hopefully slipping back to anonymity. Before they were brought to the surface, they agreed their story should be told. They selected Hector Tobar, an award-winning U.S. journalist of Guatemalan heritage to write their story. Deep Down Dark: The Untold Stories of 33 Men Buried in a Chilean Mine and the Miracle That Set Them Free was the March selection for Zion’s readers.

Many of our readers had trouble with the beginning of the book. It was slow and ponderous, laying the groundwork to bring these very different individuals to that one time and place where natural disaster would change an ordinary day to an extraordinary one. Hampering our ability to be drawn into the narrative was the fact that we already knew the ending! But gradually we learned to appreciate that the author, as one reader put it, was piecing together a quilt with each square being the life of one of the miners, family, mine owners, and politicians. So we made the acquaintance of family members and learned of intricate relationships (one miner had both a wife and a mistress which the U.S. media found to be a very sellable point of view). The author authentically depicted the cultural norms and roles of such men and their families. Multiply 33 men by wives, children, and extended family, and it is easy to see why many of Zion’s readers felt the book needed pull-out sections for each miner in order to keep them all straight in our minds. Add in peripheral characters who came to help with the extraction, details of the layout of the mine, the design and execution of the rescue strategies and it seemed to us that a map or two might have been appropriate also.

We bounced between all the commotion above ground and the enforced restricted activity below ground. To make matters worse, no one character emerged to grip our emotions and grab us as an individual. Perhaps this was simply a reflection of the reality – no one miner assumed the leadership role below ground for the entire time. Certain boundaries were set at the beginning in order to manage their meager emergency supplies and rations.   After that, they each had to find their own way to cope with the immensity of their situation. We watched factions develop then dwindle and redevelop as they struggled with slow starvation. Miners established rituals, some gathering daily for prayer, some playing dominoes. Some leaned on their faith, others on their future plans.

With the emergency oil-tainted water reserved for drinking, we learned about personal hygiene or the lack of it. Our readers gained an appreciation for the physical layout of a mine, the immense caverns, the tight spaces, how large equipment is driven on narrow roads, and most of all how hot the mine became the deeper it went. At times temperatures could reach 120 degrees Fahrenheit with extreme humidity. We marveled that the men could tolerate the discomfort along with the grumblings and audible grinding of the mountain as rock continued to move. How fortunate that the batteries of the giant equipment could be used to charge their head lamps as we could hardly imagine being left in utter darkness. Many of our readers grew anxious as the tale unfolded, and those with claustrophobia felt worse.

It was interesting to see how hope sustained the men and drew them closer for the first 17 days, but bickering began once contact with the outside world was established. As the slow rescue process plodded along, our readers’ tension increased. When the point of the enormous drill bit broke through, we could have cheered along with the miners’ relatives in the tent city outside the mine entrance. As one reader commented, seeing how people all over the world shared resources to get these men out just shows how much we could achieve if we all worked together!

So, the miners were free – but were they? Or did they trade the confinement of rock walls for the entrapment of notoriety? Prisons of post-traumatic stress disorder, addictions to alcohol, change in people’s view of them, an inability to resume their normal societal roles all had an impact. Their miraculous resurrection did not take away their troubles but rather multiplied them. Strained lives that were confined economically or emotionally before the mine collapsed were still strained, and the miners did not fit anywhere. The author returned to see how the men are coping, but this is not a story with happy endings, merely closure. Our readers were disappointed that no miner commented on his feelings as he rode the rescue capsule for 30 minutes through a rock channel. We had thought those emotions would be overwhelming. Perhaps the men were already focused on what would ensue. As our discussion drew to a close, it became evident that voicing our different perspectives of the book greatly increased our readers’ enjoyment and changed their views of the story. So much so that some who would have given it a neutral rating changed their vote. We have 5 members give it one thumb up and 4 give a neutral rating. A little advance publicity: there is a movie in the works starring Antonio Banderas and Juliette Binoche. It will be interesting to see how closely it follows the book.